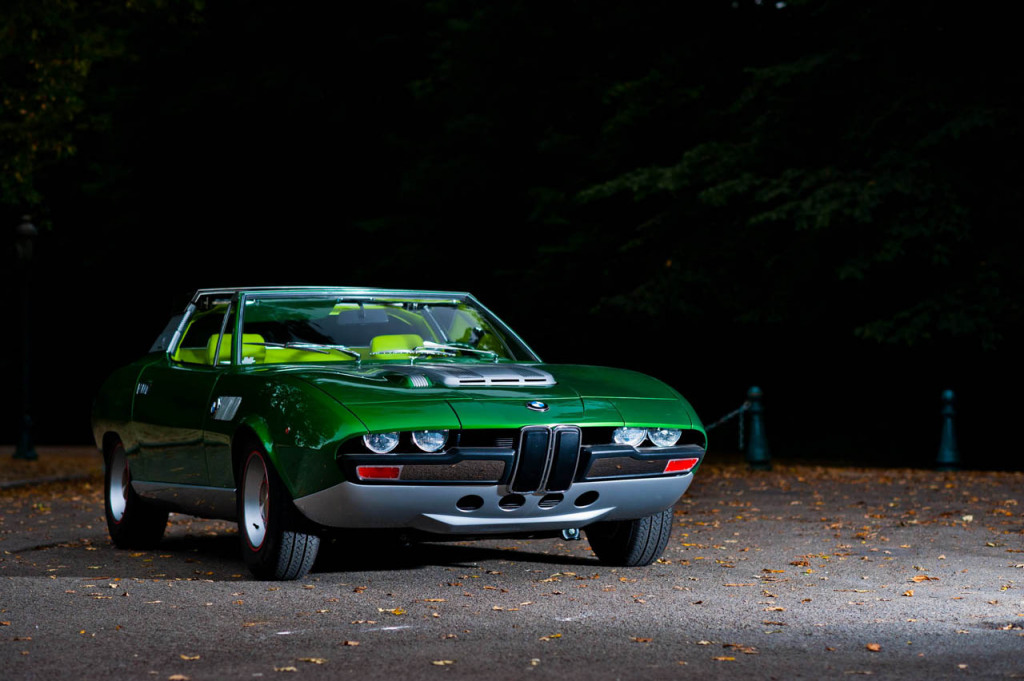 The ‘concept’ or ‘show’ car emerged after WW2 as a means of generating publicity and gauging the public’s reaction to often-radical ideas for new models. They were built as design proposals, rolling laboratories, marketing experiments, automotive provocations and everything in between. Without them and their (usually) female decoration, international motor shows would have remained little more than uninspiring mega-showrooms. Most of these show cars enjoyed only limited exposure, mainly for the benefit of the international motoring press.

What happened to these extraordinary vehicles after their short-lived career in the public eye depended primarily on the period they were made in. During the 1950s, development budgets were tight and one-off experimental cars were usually sold after the show period, just like a car from the production line. Such disposal was made possible by the fact that these early show cars were (more or less) normally functional, being largely based on the chassis and mechanical components of some existing model.

Until the 1970s, show cars were produced by specialised coachbuilders, which would deliver tailor-made cars to both carmakers and an affluent international clientele. This haute voiture niche, the heritage from the inter-war period, would quietly fade away, affected by changes in mass-production technology and increasingly stringent homologation requirements.

After this period, modern show cars would mostly disappear into carmaker’s storage facilities, some of them eventually appearing in museums or exhibitions as static icons.

In recent times the Italian school of automotive design and coachbuilding has generated the richest variety of innovative ideas. The art and science of conceptual automotive culture flourished in the Turin-Milan-Modena axis, in the fertile soil of old and new car makers, design studios and international motor sports. There, on the verge of modern times, the BMW Spicup was born.

During the 1960s BMW enjoyed a close relationship with Carrozzeria Bertone, whose star designer Giorgetto Giugiaro had been responsible for the 3200CS coupé, so when the Italian coachbuilder wanted to showcase engineer Enzo Cingolani’s idea for a retractable roof, it was to the German firm that they turned. The ‘Spicup’ (Spider/Coupé) was the result. BMW’s E3 saloon platform was chosen, the example supplied to Bertone having the 2.8-litre version of the SOHC straight-six engine installed. The chassis was numbered ‘V.0010’ – the V standing for Versuchswagen (experimental car). Its futuristic appearance notwithstanding, the Spicup’s main talking point was its novel roof, which consisted of stainless steel panels that retracted into the hefty roll bar. Although the idea never made it to production, it did influence the lines of Bertone’s Targa-top FIAT X1/9. With Giugiaro off to Carrozzeria Ghia, it was left to Marcello Gandini to finish the Spicup, incorporating what for a time was his signature front end with its part-concealed headlamps, seen also in the Alfa Romeo Montreal and Lamborghini Jarama.

After premiering on Carrozzeria Bertone’s stand at the 1969 Geneva Salon, the Spicup was exhibited at the Concorso d’Eleganza in Allassio in June and finally at that year’s Frankfurt Motor Show. Its subsequent whereabouts are not totally clear, though it appears that the car was sold to a private owner shortly afterwards. Several sources have reported the Spicup being present in the mid-1970s at the German mega-dealer Auto Becker in Düsseldorf, which had a special showroom devoted to exotic cars at that time.

A few years later, the Spicup was purchased by a Dutch motor dealer who decided to keep the car and obtained regular road registration. The exterior colour was changed from green to orange and the elaborate multi-hued green and silver interior was sprayed over – in black. In this configuration the car was used as a daily driver for the next 10 years, covering some 100,000 kilometres, which makes it probably the most-used one-off show car in the world!

Without doubt, the Spicup has turned a lot of heads during its outings. The previous owner particularly admired the car’s versatile roof, although reported by him as ‘not completely watertight’ (which probably is an understatement considering the Dutch climate). The BMW drivetrain performed flawlessly during the entire period. Emigration plans could not influence the owner to sell the car, so it was put away in storage in the 1980s, remaining there for more than 20 years. It resurfaced in 2008, offered as ‘some weird model with BMW badges’, and was purchased by the current vendor, a noted collector of coachbuilt exotica.

Tired, incomplete, scratched and dented, and with some serious signs of corrosion, the car was transported to Carrozzeria Granturismo in Milan for a complete restoration. Although they had restored various historic concept cars and other complex coachbuilt automobiles, the Carrozzeria Granturismo team, headed by technical director Aldo Goi, was fascinated by the project. Show cars are necessarily rare, but Italo-German examples are even rarer. The first phase of the work consisted of making a thorough inventory, diligently searching for the original colours and materials, and researching original documentation and pictures from the period. Removing the paint from the body revealed a patchwork of earlier repairs that had resulted in a mishmash of multiple layers of sheet metal, filler and rust. Obviously, the steel body had never received any protection against corrosion (not really essential for car shows) so humidity and salt had enjoyed free access.

The complete floorpan of the car, including the sills, was replaced and the doors mostly reconstructed. Moulds were made for new window glass, as all of it was broken, and the upholstery meticulously washed down, revealing the original interior’s spectacular shades of dark green, lime green and silver metallic fabric. Other parts remade to the exact original specifications are the steering wheel, Spicup emblems, interior trim and rear bumper. The original bumpers were made of wood (!), neatly covered with black skai; however, the rear example had been ravaged by termites and was beyond recovery.

Once totally restored, the bodywork was repainted in its original green metallic livery with silver grey accents and embellishments. The engine cover, originally fixed to the air filter, had been attached to the bonnet at some point in the car’s life, probably for reasons of practicality. It was returned to its original location, remaining in position when the bonnet is opened, a modern engine ‘disguise’ avant la lettre.

The final phase of reassembling the Spicup involved restoring the unique design features incorporated by Carrozzeria Bertone, focusing on details including the special roof mechanism, taking maximum care of the aesthetics, and keeping a critical eye on the overall result. Carrozzeria Granturismo’s interior specialists had to go to extraordinary lengths in order to get the seats right. Finally, the finished body was reunited with the BMW drivetrain and other mechanical parts, which had undergone a total overhaul and restoration at the specialists Red Willow Racing in the Netherlands.

Putting the finishing touch to any total restoration project is always immensely satisfying. But in case of the Spicup, the return to its original splendour really offers an extra dimension. It brings back the feeling of Geneva ’69, the late 1960s, an era of unlimited possibilities, growth and promise. It reconfirms the essential value of a true show car: to inspire, provoke, evoke emotions and offer a glimpse of the future.

Forty years after its first appearance, the BMW Spicup has not lost any of its charisma. It was first shown again to the public at the Villa d’Este concours d’élégance in 2009, and subsequently at the BMW Museum during the summer of 2010.